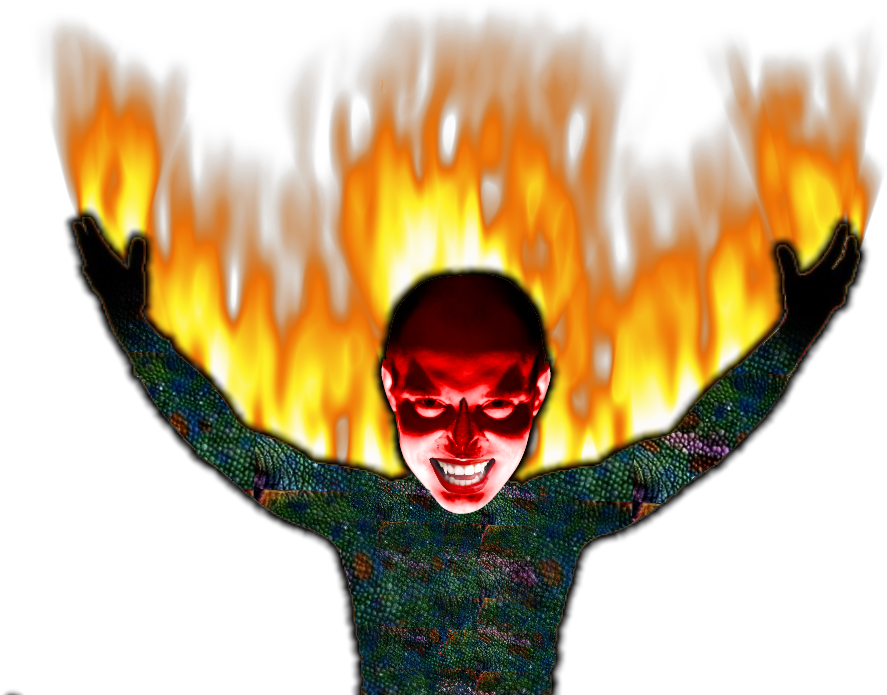 Fire clowns are gifted in the art and magic of pyromancy. They have very thick, leathery skin as befits their pyromancer natures. Fire clowns can spontaneously ignite the terminal points of their fingers and toes. The flame produced is entirely magical in its origins, with special spells found in the clown grimoire for producing spontaneous combustion. They are endlessly fascinated by the destructive power of the fire they command, and frequently engage in arson within human communities.

The versatility of a clown who can dispense fire at will cannot be overstated. Of all the clowns, the fire clown is most sought out by other clowns for a kind of kinship as they can fend off the cold in any context so long as there is fuel for a fire. Gatherings of clowns always feature pyromancy displays and bonfires put on by the assembled fire clowns. All clowns do enjoy cooking their food from time to time, and the fire clown is often a culinary expert what with his portable barbeque. The killing repertoire of the fire clown is not as highly evolved as the other clown types, but what they lack in finesse they make up for in devious cunning. They do not typically use fire as a weapon in killing human quarry – it is far too slow to ensure an easy kill. Rather, they rely on their tremendous strength and the ever-present fangs and claw-like nails to slice and puncture their victims. Fire clowns are of average size and are not especially robust, with an average height of 175 cm and weight of around 85 kgs.

While they must consume human flesh to survive, fire clowns are opportunistic scavengers as well. They are known to eat any found roadkill – which they can smell for many miles – under cover of darkness. They will drag or carry a roadkill carcass into forested areas and have a barbeque with other clowns attracted to the smell of cooking food. They are the most sociable of clowns, but also among the most devious. Frequently, it is the fire clown that starts a clown brawl by giving other clowns a hot foot or setting their clothes or hair on fire. When a fire clown is performing at a birthday party, it is an exercise in masterful suppression of natural instincts that prevents him from using his pyromancy to light candles and sparklers. Instead, to prevent detection by humans at such engagements, the fire clown resorts to using a lighter or matches.